News from High Street, for the Fashionistas among us! Couture only here please; if you can buy it off the rack, try another forum.
Post Reply
4 posts • Page 1 of 1 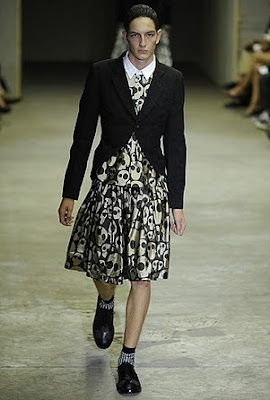 If Ray Kawakubo gets away with it, we males will be displaying these beautifully cut, skirted attires by next year. In fact, his Japanese label presented them as part of their spring/ summer 2011 collection.

Now, anticipating some reactions: let me tell you that I don't care for those shoes either.
Mary-janes or sandals, or even tanker boots would be such a better match!
I'm not into skull patterns either, but I guess that's only me. Besides, some other figures can work just as fine, be it flowers o geometrical shapes.

Other than that, the garments, including the nice fitting blazers, look gorgeous and impeccably tailored.

(Many) more photos at my blog: http://newmalefashion.blogspot.com/

Will this pic spur the same fuss as Kawakubo's funny hats I posted some months ago?

Take care you all!

Yep, seen the photo's this one is from, it was pointed at from somewhere else in the Cafe. I quite like this one, the skirt / dress thing looks very comfortable and I think the overall ensemble with the blazer is a good look, but not for a fat bearded man approaching fifty like myself, more's the pity! The shoes look ok to me by the way.

I am the God of Hellfire! and I bring you truffles!
Top

I would welcome this as mainstream attire.

I tend to dress on the "comme des filles" side of things, and would be happy if that choice were not so unusual. I simply like the light fabrics, the thin lightweight airy shoes (my strappy summer shoes), and so forth. But I am just about one sigma further off the mean than I would really like to be. So my ideal would be if the mean would just shift this direction a wee bit....

Hope he has success with this collection!

Big and Bashful wrote:Yep, seen the photo's this one is from, it was pointed at from somewhere else in the Cafe.

That would have been me commenting on this thread which was discussing the line over at GQ.

That was a look that absolutely caught my eye, as did the one of the dress. I don't particularly care for the cut of the jacket, but that's neither here nor there and merely reflects my own tastes.


Big and Bashful wrote:I think the overall ensemble with the blazer is a good look, but not for a fat bearded man approaching fifty like myself, more's the pity!

I suspect that with modifications, the look could be adapted to almost any frame or age group. However, that's one of the reasons I try very hard to egg on the younger crowd to adopt these looks earlier rather than later -- the younger set just tend, as a lot, to look better than us middle-agers.


ChrisM wrote:I would welcome this as mainstream attire.

I would welcome it as well. The style shows a good bit of promise.

It's worth noting that I'm looking at the runway-presentation as a platform that can be modified and tailored to suit almost any individual, not just the model on the catwalk. There are elements of that collection that "grab my brain", and there are pieces that repel me. But, that's where creativity comes in, and since skirted garments on guys are not (yet) beholden to hidebound "rules" we can let our creative juices really flow.
Retrocomputing -- It's not just a job, it's an adventure!
Top
Post Reply
4 posts • Page 1 of 1