General discussion of skirt and kilt-based fashion for men, and stuff that goes with skirts and kilts.
Post Reply
11 posts • Page 1 of 1

I do not often buy skirts new because I don't like what is on offer or they are too expensive for what they are.
Today, I had to go to town to get a pink slip (an annual vehicle roadworthy certificate) and while I was waiting for it to be checked over I walked up the the shopping centre to check out the new Kmart store (new to Broken Hill).
There were mini skirts on special; nice material (linen/viscose) and with pockets. At the price I bought them without trying on because this time of year it is a challenge to get back home before dark. I have just tried one on and am very happy with it; a bit longer than my usual fare (17") but very comfortable and enough flare as not to inhibit one's stride. I bought one in "New Tan" and one in "Deep Green" (more like and olive green). A size 10 was true to size (for me). 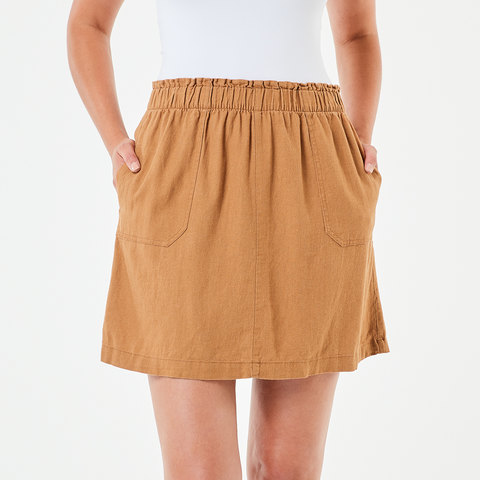 That is a good looking skirt. I usually do not wear minis but I believe I would not have any trouble wearing that one..
"It is better to be hated for what you are than be loved for what you are not" Andre Gide: 1869 - 1951
Always be yourself because the people that matter don’t mind and the ones that mind don’t matter.
Top

I also would wear that. Decent pockets, too.
I believe in offering every assistance short of actual help but then mainly just want to be left to be myself in all my difference and uniqueness.
Top

Cute little skirts Anthony and I have been looking up your sizing. Size 10 has a waist of just 71 cms which roughly translates to 28 inches.

Ahhh, there is quite some stretch to the waist ...... both. No good having elastic if it is not doing it's job.
Anthony, a denim miniskirt wearer in Outback Australia
Top

Sorry this is in Dutch, but copy it to Google Translate and you will read about a work skirt for women, that can be worn by man also. Bläkläder is also available in Canada and UK but that sites doesn't recognize the item number 71481845 / Service Skirt with stretch material.
Be proud to wear a skirt or dress, they are just clothes. Yes , they are for men too
I'm Marica, a 56 year old girl.

KMart is still around ?
Wait to Wal*Mart finds out that location - it will be history.
In the meanwhile Amazon the B-I-G fish is waiting to gooble up everything everywhere.
"Kilt-On" -or- as the case may be "Skirt-On" !
WHY ?
Isn't wearing a kilt enough?
Well a skirt will do in a pinch!
Make mine short and don't you dare think of pinching there !
Top

KMart is still around ?
Wait to Wal*Mart finds out that location - it will be history.
In the meanwhile Amazon the B-I-G fish is waiting to gooble up everything everywhere.

Denimini, that is a sensible looking skirt. I was wondering how our NSW and VIC members were going with the lock downs in those areas, as I didn't think that most of the stores would be open for walk in business.
Top

6ft3Aussie wrote: ↑
Thu Aug 19, 2021 9:28 am
I was wondering how our NSW and VIC members were going with the lock downs in those areas, as I didn't think that most of the stores would be open for walk in business.

That post was 27th May, old news now and a lot has happened since. No walk-in at present. We have a 5km limit for shopping, bad luck that the shops are 200km away. Although the Army might bring some supplies, I would be reluctant to ask them to buy me a mini skirt

Also, as far as I know, K-Mart is an Australian retail chain, I was not aware that they had stores in the US, unless they are two completely different entities.

A bit of history

Kmart Corporation (/ˈkeɪmɑːrt/ KAY-mart, doing business as Kmart and stylized as kmart) is an American big box department store chain headquartered in Hoffman Estates, Illinois, United States. The company was incorporated in 1899 as S. S. Kresge Corporation and renamed Kmart Corporation in 1977.[3] The first store with the Kmart name opened in 1962.[4] At its peak in 1994, Kmart operated 2,486 stores globally, including 2,323 discount stores and Super Kmart Center locations in the United States.[5][6][7][8] From 2005 through 2019, Kmart was a subsidiary of Sears Holdings Corporation and is now a subsidiary of Transform SR Brands LLC. S. S. Kresge, the founder of the company that would become Kmart, met variety-store pioneer Frank Winfield Woolworth while working as a traveling salesman and selling to all 19 of Woolworth's stores at the time.[9] In 1897 Kresge invested $6,700 saved from his job into a five-and-dime store in Memphis, Tennessee. He jointly owned the first store with his former tinware customer, John McCrory.[10] Kresge and McCrory added a second store in downtown Detroit the following year. These were the first S.S. Kresge stores.[11][12][13] After two years of partnership, he traded McCrory his share in the Memphis store, plus $3,000, for full ownership of the Detroit store, and formed the Kresge & Wilson Company with his brother-in-law, Charles J. Wilson.[12][13]

Kmart Australia Limited is an Australian-based chain of affordable retail stores owned by the Kmart Group division of Wesfarmers. The company operates 234 stores across Australia and New Zealand,[2] consisting of 209 stores in Australia and 25 stores in New Zealand, with its head office located in Mulgrave, Melbourne. Kmart Group, the department store division of Wesfarmers, also owns and operates Target Australia and online retailer Catch.com.au.
Kmart Australia Limited was born out of a joint venture between G.J Coles & Coy Limited (Coles) and S.S. Kresge Company in the United States, with Kresge owning 51% of the common stock in the company. They began to develop Kmart stores in Australia in 1968.[3] The first store opened in Burwood East, Victoria on 30 April 1969 with an estimated 40,000 people passing through the checkouts and taking in over $97,000 (equivalent to A$1.17 million in 2021) on the first day.

SO - K-Mart came into being well before Walmart. Walmart took the "idea" to
another level. Walmart is the K-Mart(S.S.Kresge) of today. As a small child,
I remember shopping at Kresge's '5 & Dime'. What fun

denimini wrote: ↑
Thu Aug 19, 2021 11:11 am
No walk-in at present. We have a 5km limit for shopping, bad luck that the shops are 200km away. Although the Army might bring some supplies, I would be reluctant to ask them to buy me a mini skirt

On the basis of that, I'd say that a 400km round trip to stock up could be justified, as the rules clearly state that essential trips such as going to the supermarket for food etc is allowed. I'm picking that your closest major centre would be Broken Hill, and I've heard that they've had problems out there, but where you are should be all OK.

It would be interesting to see the reactions of delivery drivers who had never seen you before coming out to your town to bring supplies, and delivering items to you while clad in your signature denim miniskirt.
Top
Post Reply
11 posts • Page 1 of 1

Return to “Skirts and Kilts for Men”